Working Together: Partnership Between Resiliency and Sustainability

Working Together: Partnership Between Resiliency and Sustainability 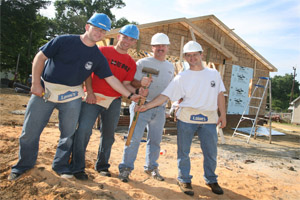 When I tell people that I work in the sustainable build and design industry, they usually assume we’re all tree huggers collecting plastic bottles and straws and wearing hemp clothing. They don’t understand that sustainability goes much deeper than that. Its official focus is to avoid the depletion of natural resources, so ecological balance is maintained. In laymen’s terms, we just want to save the environment so that it’s still alive and healthy in a thousand years, right? But with more climate changes and catastrophic events happening, the AEC and green build and design industries must look at making resilient buildings, not just sustainable ones. Between Hurricane Andrew in 1992, Hurricane Katrina in 2005, Hurricane Sandy in 2012, and Hurricane Harvey in 2017, over $300 billions of property damage occurred. This doesn’t take into account non-hurricane related flooding, earthquake damage, or tornados and windstorms. It’s great if we are designing and constructing sustainable buildings, but it doesn’t matter if we can’t make them able to withstand natural disaster.

This idea of building and community resiliency is why the GBCI has recently adopted the RELi standard. Developed through collaboration led by MTS (Institute for Market Transformation to Sustainability), Perkins+Will, and the C3Living Design Project in 2012, the RELi standard is a rating system and certification for buildings, neighborhoods, homes and infrastructure pertaining specifically to “creating buildings and communities that are better adapted to a changing climate and better able to bounce back from disturbances and interruptions,” according to Mahesh Ramanujam, President and CEO of USGBC and GBCI. Similar to LEED in structure and format, there are requirements that need to be met for a project to be RELi-certified, and while some of the RELi standard repeats sustainability factors also found in LEED, the two standards are different in many ways. The lead developer of the RELi standard, Perkins+Will architect Doug Pierce, says, “Sustainability and resilience are like two sides of the same coin. They are strongly related, but they have a different focus. Sustainability has been focused on mitigating chronic sorts of issues like climate change. Resilience is really focused on adapting to the shocks, the acute shocks.”

The Basics of the RELi Standard

There are four credits in the RELi standard:

In depth information can be found on these credits and the different sections in the RELi Action List + Credit Catalog.

RELi by itself is an innovative concept, but by joining forces with the USGBC and GBCI, it’s become an important and necessary part of the build and design industry.

It’s great if we are designing and constructing sustainable buildings, but it doesn’t matter if we can’t make them able to withstand natural disaster.

GBCI and the RELi Standard Work Together

The GBCI, in partnership with the USGBC, has adopted the RELi standard. What this means is that the standard will eventually become a global rating system under the USGBC’s rubric, managed and operated by the USGBC and the GBCI.

But even more exciting is that the USGBC’s LEED program has also adopted three pilot credits in the new LEED pilot credits on resilient design. These credits land under the Integrative Process category of LEED and are applicable to all BD+C rating systems, as well as Homes and Mid-Rise Residential systems. This Resilient Design Institute blog post breaks this down into understandable terms.

Apart from the environmental benefits of this partnership, there is also a large economic benefit. Resilience planning and adaptation are expensive, like trillions of dollars expensive. Between old buildings needing updates, climate credit rating downgrades for non-resilient buildings, and the insurance industry withdrawing from high-risk markets, the RELi standard and its partnership with the USGBC can work toward reducing the cost of resiliency planning and adaptation.

The speed at which the industry is changing and growing is phenomenal. One way to increase your own resiliency and adaptation as a product manufacturer is to get familiar with the different standards, like the most widely used one, LEED. Becoming a LEED Green Associate is a first step toward understanding where the green build and design industry is and where it’s going. Taking the free LEED Prep Exam course is an easy way to prepare for the LEED GA exam.

Additionally, having transparency documents for your product is pretty much the norm now. As discussed in a previous blog, HPDs--Why Product Transparency is the New Norm, HPDs aren’t going away. Creating an HPD can be done alone, but it’s much easier with the help of Elixir Environmental.

How do you see the role of resiliency growing in the industry? Is the adoption of the RELi standard by the USGBC a game changer in any way?