Climate Change, Part 2: It’s All About the Straws, Isn’t It?

Climate Change, Part 2: It’s All About the Straws, Isn’t It? 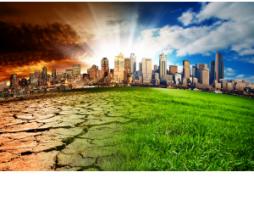 Wouldn’t it be great if saving the world was as easy as ditching straws or riding our bikes to work? Sustainable living is definitely affected by our personal best practices, but it’s obviously a global problem in a symbiotic relationship between the world as a whole and humans on a personal level. At this point, however, big changes need to happen. And probably not just big changes, but innovative, outside the box big changes. We need to start doing things differently than we have ever done them before.

In a part 1 of this 5-part blog series, I wrote about the effect manufacturing has on greenhouse emissions, and referenced Bill Gates’ GatesNotes blog. In his post, Climate change and the 75% problem, he lists the top contributors to climate change. I was surprised to find out that number two on the list is agriculture, which contributes around 24% to overall greenhouse emissions. He states, “If cattle were a country, they would rank third in greenhouse gas emissions”, just after China and the US. It’s not just that cattle produce a huge amount of methane, either. Deforestation removes trees that pull CO2 out of the air, and then trees release carbon back into the atmosphere when they are burned. Deforestation takes place because of the need to clear land for crops, not just to raise cattle.

Even if the whole world switched to a vegan diet, this problem would be present, though at a lower rate, because as population grows, the need for agriculture land grows too, thus still resulting in deforestation. So what kind of outside the box solutions can be created?

How Floating Farms May Save the World

Okay, so maybe they won’t save the world, but one outside the norm idea that could help contribute to sustainability is the floating farm. A Dutch property development firm, Beladon is launching the world’s first floating farm in a city port in Rotterdam’s Merwehaven Harbor. It’s being constructed in the harbor on a floating concrete platform, intended to hold 40 cows for dairy farming. The thinking behind this set-up is that reducing the distance food travels before it reaches the tables of consumers, then the environmental impact will be lessened due to a reduction in transportation pollution, among other things.

The floating farm is designed with three levels and will be anchored to the ocean floor. According to an article in Building Design + Construction’s October 2018 magazine, “The cows will be housed on the second story in a garden-like environment. The roof will have a rainwater collection system and PV panels. On the story below the cows will be collection bins for manure and urine, which robots will collect throughout the day (robots will also milk and feed the cows). The manure will be used as fertilizer to help grow new fodder for the cows. The entire process will create a self-sustaining closed circle. Think of it as a less majestic version of the circle of life.” Additionally, the main level will have spaces for LED grass production, dairy production of 200 gallons of milk a day, water purification, and manure and urine processing with a design adaptable to farms other than dairy. The cows will have access to a pasture, and the farm is designed to withstand imbalances in weight distribution.

The idea for the floating farm was created by Beladon engineer, Peter van Wingerden, in 2012. He was in New York when Hurricane Sandy struck. This created a slew of challenges for fresh produce to be delivered, thus helping Wingerden to realize not only the environmental impact of close-to-the-table food production, but also of the need during a natural disaster. With this in mind, the floating farm is built to be resilient to hurricanes.

Sustainable living is definitely affected by our personal best practices, but it’s obviously a global problem in a symbiotic relationship between the world as a whole and humans on a personal level. At this point, however, big changes need to happen. And probably not just big changes, but innovative, outside the box big changes. We need to start doing things differently than we have ever done them before.

Isn’t Only for Dairy Farms

San Francisco based start-up Plenty, founded in 2013, has been soliciting investors for its indoor, vertical indoor farms growing leafy greens. They use vertical poles, using hydroponics and LED lights, with zero pesticides or soil. And in Japan, a company called Spread is developing automated vegetable farms in vertical urban settings with what they call the Techno Farm concept. While these aren’t floating farms, they are urban, indoor, and so far, successful at contributing positively to sustainable food production.

Further, there is an project called Smart Floating Farms which is based on a “…Floating Platform Multi-layered strategy which combines Aquaculture (fish), Hydroponics-Aeroponics (crops) and Photovoltaics (solar power & other renewable energies), we aim that these floating farms can be located close to areas where food is more needed, causing a positive social & economical impact, with the potential of creating new emergent economies and also some of them becoming automated Farm Clusters run by the use of IT technologies/software.” (PlanetForward.org) Smart Floating Farms sounds similar to the floating farm in Rotterdam. With these sustainable options showing promise, it’s a wonder why more of this urban and alternative farming isn’t being used.

But with agriculture being such a large part of greenhouse emissions and climate change, any challenges to these floating farms and urban farming need to be addressed. Our planet and our health cannot keep farming and eating the way we’ve been doing it. There isn’t any other choice but to change at this point.

How Can Product Manufacturers Benefit?

With these floating farms and urban farming using known technology and methods, it’s possible some manufacturers already make a product relevant to this idea. With the expected climate changes and population boom, innovative food options are going to continue to be invented. Begin looking into these start-ups and new inventions now and see how your product can be in the front of the line.

While you’re at it, now is a good time to review manufacturer needs for transparency documents, like HPDs. If specification on innovative and sustainable projects is a goal, then these documents are the best way to start working toward that goal.

What is your experience with floating farms and innovative approaches to agriculture?