3D Printing and its Impact on the Construction Industry

3D Printing and its Impact on the Construction Industry 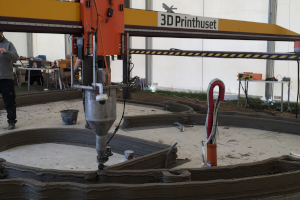 I’ll admit, 3D printing has intrigued and confused me since I first learned of it. I didn’t understand the materials used or the processes, especially in reference to big things like organs and buildings and medical devices! But last month, I read an article about Project Milestone in the Dutch city of Eindhoven. It is a planned community of five homes built through 3D printer fabrication. The Dutch are utilizing this option due to a shortage of bricklayers, but also to offer evidence of how 3D printing can cut costs and construction waste, curbing greenhouse emissions that are produced from producing cement. I soon discovered that the Netherlands weren’t the only country looking to use 3D printing in construction. (The article referenced can be found here.

According to the website 3Dprinting.com, “3D printing or additive manufacturing is a process of making dimensional solid objects from a digital file.” Multiple layers of material are laid down, until the layers add up to the object being printed. This starts with the creation of a 3D model in a computer program, such as a CAD file. Once the model is designed, the model then must be sliced, or divided, into tons of horizontal layers. Those slices are then fed to the printer via USB, SD, or Wi-Fi. The printer is then ready to print the object in 3D, layer by layer.

The use of 3D printing in construction technically began back in 2004 when Professor Behrokh Khoshnevis from University of Southern Carolina attempted to print the first 3D wall. That attempt has grown into the ability to build a while house in 20 hours. Now, multiple countries and industries are using 3D printing or developing ways to improve upon it and use it.

Being able to use 3D printing in construction has many benefits, some of which are:

It’s Not Too Good to be True, but There are Some Challenges

There are a few things that slow down the forward movement of 3D printer construction. One is hiring or contracting qualified 3D printer operators. It’s still seen as more of a manufacturing or academic area, meaning not many construction laborers and managers are trained to use and operate a 3D printer. New collaborations are going to need to be formed, and new skills learned, and that takes time.

Another issue is navigating the already challenging maze of permits and building codes. Using a method that is still so new and technically not even proven to withstand time makes it tricky to jump through all the approval hoops.

And speaking of being so new, there is still the issue of whether 3D printer buildings are as structurally sound as traditionally built construction.

From the perspective of a product manufacturer, the challenge presented is that specifiers would be using less materials for building, meaning those material manufacturers see a drop in sales or need. But instead of looking at is a negative, see it as an opportunity to begin looking at ways to diversify or join forces with another manufacturer. If recent news is any indication, 3D printing is going to continue to grow. Start thinking about it now, and you’ll be ahead of the game.

In the meantime, feel free to look into our resources if you have any questions about getting specified, want information about transparency documents (which would still be necessary on 3D printing projects), or are interested in getting your LEED Green Associate credentials.

Have any of you already been specified on any 3D printing projects, or have any experience with the process?